We have been continuing our attack on kikuyu regrowth at the food forest. None of us like digging it out  much (thanks Eric and Simon for your mammoth efforts on this front!) We have so far tried spraying with cheap white vinegar, painting with (less cheap) eucalyptus oil and then spraying again with (even less cheap) Go Natural Organic Herbicide (pine oil based). Our results so far show that all three kill off the top growth BUT do next to nothing about killing the roots outright. OK so we knew this already but we were hoping that depriving the roots of their food source (ie. their photosynthesising leaves) that the grass would be significantly weakened. No sign of that just yet I’m afraid. Or maybe the root mat is just very extensive, deeply buried in the clay and able to withstand a fair bit of top growth abuse – just the kind of grass we need for lovely green  parks!

So then, next step is mulching it out with newspaper. We did consider that for the site at the very start of the project but decided that it would be too much work for this size area. Carting hundreds of wheelbarrow loads of mulch to cover over the newspaper/cardboard is almost as hard work as digging it out with a mattock. The council did a pretty good job of removing the grass by scraping it off the top but of course the major downside is that we then lost most of our top soil and the grass roots deeply embedded below the scraped surface are re-sprouting to give us grief now.

The worst affected areas are at the extreme ends of the food forest and there are a couple of bad patches here and there. So here are some pics of the latest newspaper mulch campaign (thanks for your help Moira – you’re a star).

The northern edge being invaded by grass 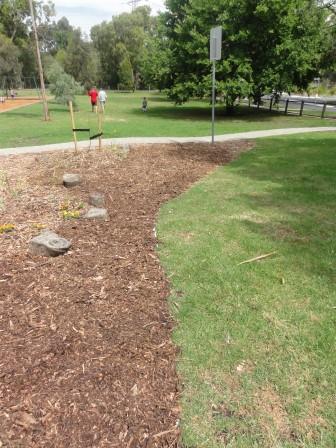 The northern edge after mulching with newspaper

Of course when I dig out old newspapers there is always SOMETHING that catches my eye. Here is a Leunig gem that made my morning.